Where are they now? Minke Goes

Welcome to our newest column, Where are they now? My name is Jean Ormiston and through these interviews I would like to introduce you to the alumni of Team Energy!

Once I had joined Team Energy, I was curious as to how it was founded and what the founders and alumni of Team Energy were up to now.

I have had the honour of interviewing Minke Goes, one of the founders of Team Energy, for this first article!

Minke lives in Den Bosch and works in Utrecht at Ecofys, a Navigant Company. She can still be found in Eindhoven and even at the TU/e sometimes as she is now supervising a grad student. She started the Sustainable Energy Technology (SET) master at the TU/e in 2013, after having done her bachelor in Amsterdam. She had a need for having casual discussions about how to accelerate the energy transition in her free time, but she could not find a place to do this at the university. At an Energy Day, organized by the Strategic Area Energy, she spoke with Paul van Esdonk, who mentioned that there was a small group of students with an idea of setting “something” up (yes, it was very vague). Two other students who started with this idea, Pieter Custers and Guido Lange, had just gone on a exchange adventure and left Paul in charge of bringing students together to get this idea forward. The small group of enthusiasts started meeting regularly and soon had a need for a name, and for simplicity’s sake they called it Team Energy, and the name stuck. When Pieter and Guido returned the group organized a dinner with a post-it session at someone’s house which formed ‘a tipping point’ according to Minke, and during this evening they established what they wanted to do and who was interested in doing what.

At the Energy Days in December of 2013, they got the opportunity to officially presented themselves as a student team of the TU/e! Only there was still a lot of work to do: a student team needs a website and a logo. Within the very short time frame, the hectic preparations started. A competition was set up for all creative minds to design the perfect logo, and the winner was rewarded with 100 euro’s! Furthermore, Daan was working day and night to get the website working. The logo was so loved that we only parted with it since recently:

So, in December 2013 Team Energy went live: a group of around fifteen students, primarily Master students of SET. The first activity that started was the Energy Café. This idea stemmed from Minke her idea of casually discussing energy in an informal café atmosphere, and in her opinion the most creative solutions to energy problems are devised in an informal setting. 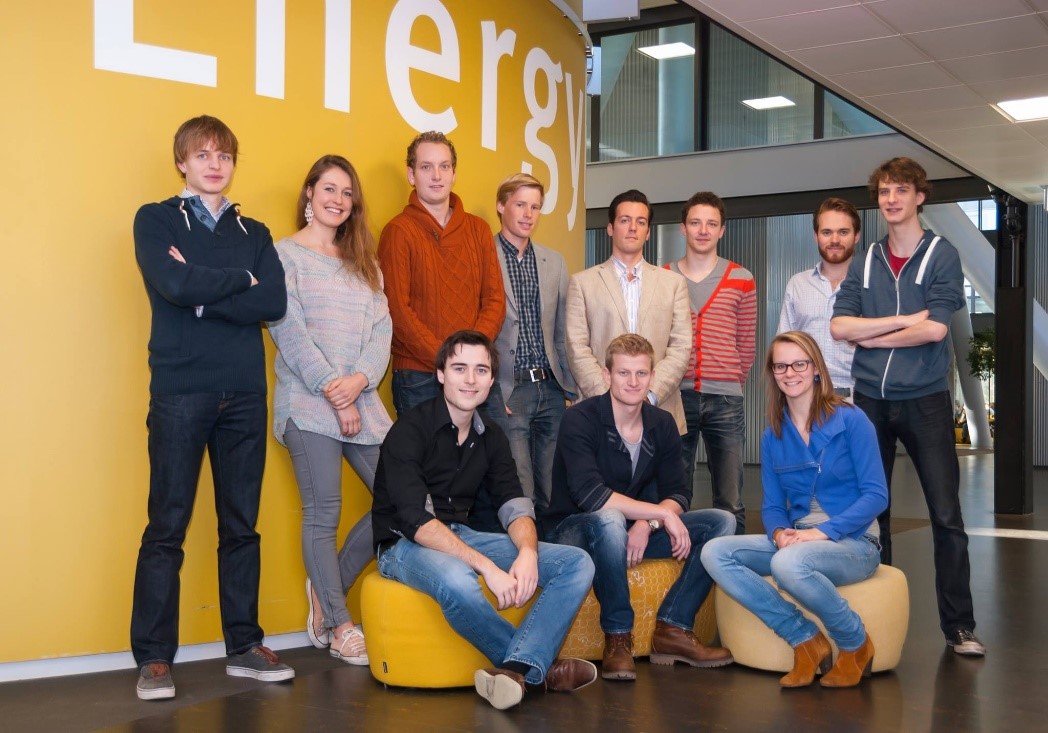 To make sure that Team Energy stayed alive, it needed to recruit new members, and especially fresh young (bachelor) students of other studies as well! This meant going from class to class and present Team Energy to all students. However, not everybody is a great public speaker so Pieter and Minke spent an evening in a recording studio to make a promotion video (check it out on YouTube: https://youtu.be/_QiavQbvx6s )!

At first Team Energy didn’t have an actual board, instead they followed the organisational structure described in the book Eckart’s Notes. They felt that the board should not be above the other committees within the team, but should support them on an equal level, so this is exactly what Minke, Pieter and Katelijn did. They were of the opinion that the TU/e wasn’t prominent on the research field of energy, unrightfully so, and so in founding Team Energy they wanted to give the ‘energy reputation’ of the TU/e a boost. Many things were going on in the energy field, but these were spread out over the campus and not centralized. They therefore decided to dedicate a part of their website to spreading information about these initiatives. This centralized knowledge was one of the goals of Team Energy, but more importantly they aimed towards bringing students into contact with companies in the energy sector, through internal cooperation and external.

The energy congress (Energy Now, check out their website!) and challenge were started up later.

So now that we know Minke’s past with Team Energy, what is she up to now? Has her membership of Team Energy influenced her career? One could definitely say so: she now works at Ecofys as a consultant. For those of you who are not familiar with Ecofys, they are a global consultancy which advises companies working in many different sectors, such as industries and governments, but also NGO’s, on how to prepare for and carry out the sustainable energy transition with the goal to reach the targets set in the Paris Agreement (stay well below 2 degrees global warming). They enable clients to adapt to changes and identify new opportunities quickly.

In 2016, Ecofys joined forces with Navigant and is now part of the leading global energy consultancy.. Minke thoroughly enjoys her job even though the work she does now is more strategic than the study she did: she is focussed on working with energy companies and system operators.

‘The multidisciplinarity in the energy sector interests me most, and the fact that the transition to sustainable energy is crucial and beneficial to the whole world.’ Minke thinks the sustainable energy transition has an impact on you, me and everyone on the globe. The transition is a complex one because it affects many sectors, social and economic, and therefore it still poses many challenges.

And her plans for the future? ‘I don’t know what the future will bring exactly, but I do know that I want to accelerate the energy transition. I hope I will always work at a place where I can add the most value. Whether that is as a consultant, entrepreneur or in a governmental organization, I will look for my opportunities.

‘Look for your own strengths’

Minke has an idea of which direction the sustainable energy sector should be heading. In her opinion, there should be sustainable leadership, ‘doing instead of just shouting’ and pulling the population in the right direction. Initially, she was all for the ‘power to the people’ concept, but this decentralized approach simply doesn’t work fast enough to reach the Paris Agreement, so it needs to be combined with a centralized. She is happy to see that the world is already over a tipping point, for example in the US Trump cannot stop the energy transition as companies and cities are leading the way to decarbonization.

And what is her advice to young energy enthusiasts out there? Look for your own strengths and fully utilize your passion! But do not forget to be patient (sometimes), which is quite challenging when working with big conservative companies which are slow. Minke is hopeful for the new generation of energy enthusiasts, as they are good at communicating between different disciplines and multiple generations. She has noticed that some of the older generations working in the sector have become pessimistic due to many setbacks. The most important thing is to work together on this! Minke is therefore happy that Team Energy still exists, as it poses an opportunity for young enthusiasts to get involved!

I hope Minke’s story has inspired you to do your part in the energy transition!

Stay tuned for the next article of the column: Where are they now?